I’m not a very ‘writerly’ person. Real people (ie, those people who aren’t writers) seem to think that writing is 90% lying down and eating chocolate, and 10% picturesque bursts of frantic typing, preferably backed with a rock-track and ending with sheets of paper being triumphantly (and inexplicably) wrenched from the machine and thrown into the air.  None of this applies in my case.

I have a day job, children, cats and dogs and a house that, despite my best efforts, does not clean itself (dogs don’t mop). Writing is, therefore, precious minutes prised from the rockface of chores, like an indulgence.  None of this helps when writing romantic comedy.  It can take me a good run-up to feel vaguely romantic, especially when the downstairs toilet has blocked up again and one of the dogs has been sick on the sofa; comedy is hard to come by when the kids are fighting to the death over a sock, and writing is the last thing I want to come home and do after an early start. I’ve found that routine has been the thing that has saved me – even I can manage to be both romantic and funny between the hours of 1pm and 6pm on a daily basis (rigidly structured, as my boyfriend will tell anyone, never expect me to be romantic out of hours). 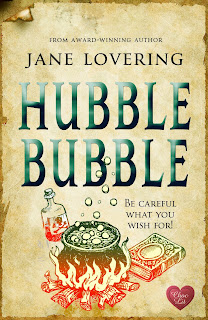 So, for anyone out there who wants to write but feels that they don’t have the time, my advice would be to set aside some time every day, it doesn’t have to be hours, even ten minutes is better than nothing. It multiplies up, you see. Ten minutes a day is an hour a week (I’m letting you have a day off for lying around fanning yourself and saying ‘phew’ a lot). On a good day you can write 1,000 words in an hour. That’s ninety hours to write a book or, in our computation, eighteen months. Eighteen months, working one hour a day. Give yourself another six months to edit, rewrite and sort your plot and, voila! Two years and you’ve got a complete book, ready to go!  At ten minutes a day.  Andl if you think two years is too long, well, you’ve got two choices, haven’t you? Put more hours in, or give up the idea of writing a book and go and do something with a faster rate of return. Play Monopoly, or something.

Holly Grey only took up witchery to keep her friend out of trouble and now she's knee-deep in hassle, in the form of apocalyptic weather, armed men, midwifery...and a sarcastic Welsh journalist.Be careful what you wish for...Kai has been drawn to darkest Yorkshire by his desire to find out who he really is. What he hadn't bargained on was getting caught up in amateur magic and dealing with a bunch of women who are trying really hard to make their dreams come true.Together they realize that getting what you wish for is sometimes just a matter of knowing what it is you want...

Find Jane around the Internet at these locations:

www.samhainpublishing.com/authors/jane-lovering
Posted by Wendy Ely at 9:43 AM No comments: